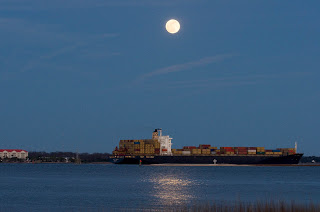 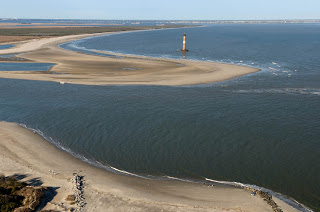 Some days are just gifts and today was just such a day. When I got home from running Logan in the park there was a message from Jay asking if I wanted to go up in the chopper and take some photos. Well yes – duh! OMG I think I could become addicted very quickly. It is the coolest sensation, even from the start when the rotors start to turn really fast and the machine kinda bounces and gathers lift. It’s almost like it’s saying “let me up, now, now.” I’m always a little anxious when I fly in planes, but this was so different, and even flying without a door, nothing between me and the ground, I felt safe – almost as though dancing through the sky with gusts of wind buffeting us this way and that, and Jay continuously adjusting the controls. Very, very nice. Here’s a bird’s eye view of Morris Island and the northern tip of Folly Beach. You can see more aerials at http://vanessak.smugmug.com/gallery/5969463_zg7G8#453050194_hANUJ

After that, Raymond and I hooked up to catch the moonrise and the shot of this container ship leaving the Charleston port under a full moon was taken from Waterfront Park.
The day ended with a great Mexican dinner and margaritas at Zia on Maybank with friends Marty, Donna & Chris. Can’t get much better than that.